Mixed Mode Sorting on the CytoFLEX SRT For Prodution

Flow sorters can physically separate a desired population of cells from a cell suspension. They combine a sensitive flow cytometric analysis with a sorting apparatus. The analysis components establish cell identity by presence or absence of surface or intracellular proteins. Cells can also be more finely divided based on activation status and expression of protein by analyzing or sorting based on a spectrum of expression. Once a target population is selected, software and the sorting apparatus divert a droplet containing the particle of interest to the desired output vessel. Sorting can provide a highly enriched population of cells for downstream use in a wide variety of assays, such as genomics, adoptive cell transfer, culture, proteomics, and imaging.

Flow sorters can physically separate a desired population of cells from a cell suspension. They combine a sensitive flow cytometric analysis with a sorting apparatus. The analysis components establish cell identity by presence or absence of surface or intracellular proteins. Cells can also be more finely divided based on activation status and expression of protein by analyzing or sorting based on a spectrum of expression. Once a target population is selected, software and the sorting apparatus divert a droplet containing the particle of interest to the desired output vessel. Sorting can provide a highly enriched population of cells for downstream use in a wide variety of assays, such as genomics, adoptive cell transfer, culture, proteomics, and imaging.

The CytoFLEX SRT is an electrostatic droplet sorter. The sorting apparatus that is used is similar to the systems that make inkjet printers work. In the CytoFLEX SRT, after cells are interrogated in the flow cell, they exit the flow cell in a stream. That stream receives vibration energy from a vibrating crystal associated with the flow cell. This vibration causes the stream to break up into droplets as seen in figure 1. The frequency of this vibration is how fast droplets are made and this value can vary slightly from day to day. Once an event of interest is detected, the system waits until that event is in the last attached droplet on the stream, the stream is then charged in time with the vibration frequency so that the droplet breaks off with a static charge and the rest of the stream returns to ground potential. When the charged droplet passes through a set of charged plates, it is pulled toward the plate with opposite charge and lands in the collection vessel. 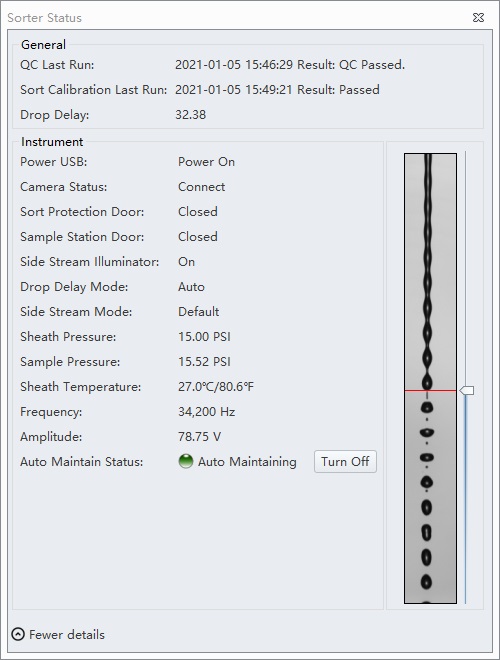 Figure 1. An illustration of Droplet Formation. Note the frequency in Hertz, which is also the rate of droplet formation. The last attached droplet is directly above the red line and is the droplet targeted to receive an electrostatic charge.

This application note focuses on the different sort modes available on the CytoFLEX SRT cell sorter. Sorts may have different desired purity or yield outcomes based on the downstream assay. This can be addressed through the selection of an appropriate sort mode. This application note defines and describes the different sort modes on the CytoFLEX SRT cell sorter. Some common sort terms will also be defined.

A combination of Boolean (e.g. AND, OR or NOT) or hierarchical logic of regions and gates to determine if an event is positive (i.e. desired for sorting). Events that fall outside the sort logic are considered negative events. Depending upon the sort mode, negative events can be considered contaminants and can cause a positive event to be aborted. Regions are defined in terms of either one parameter (histogram) or two parameters (dot plot). Gates are Boolean combinations of regions. Hierarchical gates are created from nested populations – a population within a population within a population. CytoFLEX SRT creates both Boolean and Hierarchical gates. The user defines which gate to apply to the sort logic.

A command given to the software to establish when to charge and deflect a drop. The sort mode plays a crucial role to determine the ultimate yield and purity of the sorted cells based on the proximity of contaminants (non-targets) to the particle of interest as selected using the sort logic.

An event that met the requirements in sort logic but had a contaminant in the sort Guard Band (i.e. too close to allow for sorting based on the sort mode). Often these abort events go into the waste stream and cannot be recovered. However, with CytoFLEX SRT these events can be sent to an alternative stream to allow for culturing, re-sorting or further analysis.

A measure of how many events were aborted. Expressed as a percentage it is calculated by (Drops sorted)/(Drops sorted + Drops aborted) x 100%. The higher the percentage, the fewer aborted events in the sort. When running on clean single-cell suspensions, efficiencies of over 90% can be achieved. Clumps, higher event rates, and debris in the sample can all decrease efficiency.

Based on the estimated number of cells that were reported as sorted, recovery is the percent that are counted in the tube. It can be estimated by several methods such as visual counting or running a sample with volumetric counting beads.

Based on the estimated number of cells in the starting sample, yield is the percent that were sorted and returned for downstream use. Formulated as Yield= ((# of events in the collection tube x purity) / (total number of particles in the starting tube x percent target particles)) x 100%.

Selected populations may be sorted using three different modes depending on the output desired.

Enrich Mode is used when recovery is the most important aspect of the sort. With Enrich, all positive events (i.e. events that satisfy the sort logic) are sorted.

Purity Mode is used when the purity of the sort is the most important aspect. Negative events with close proximity to positive events make sorting a pure droplet unlikely and the droplet containing the positive event is sent to the stream indicated for aborts (e.g. waste or another sort stream). Used when purity is more important than recovery.

The Single Mode is used when having only one positive event per drop is the most important aspect of the sort. It is most commonly used in plate sorting for single cell applications such as cloning and -omics applications.

Mixed-mode sorting can allow a high level of flexibility to your sort experiments. One example is a case where the sort requires enrichment of a rare population that cannot be lost to aborts due to expense, rarity of sample, or other constraints. We will stain a process control product with a multicolor panel and demonstrate the effect of different sort modes on the sorted cell population outcomes. Figure 2 shows staining of the unsorted sample. 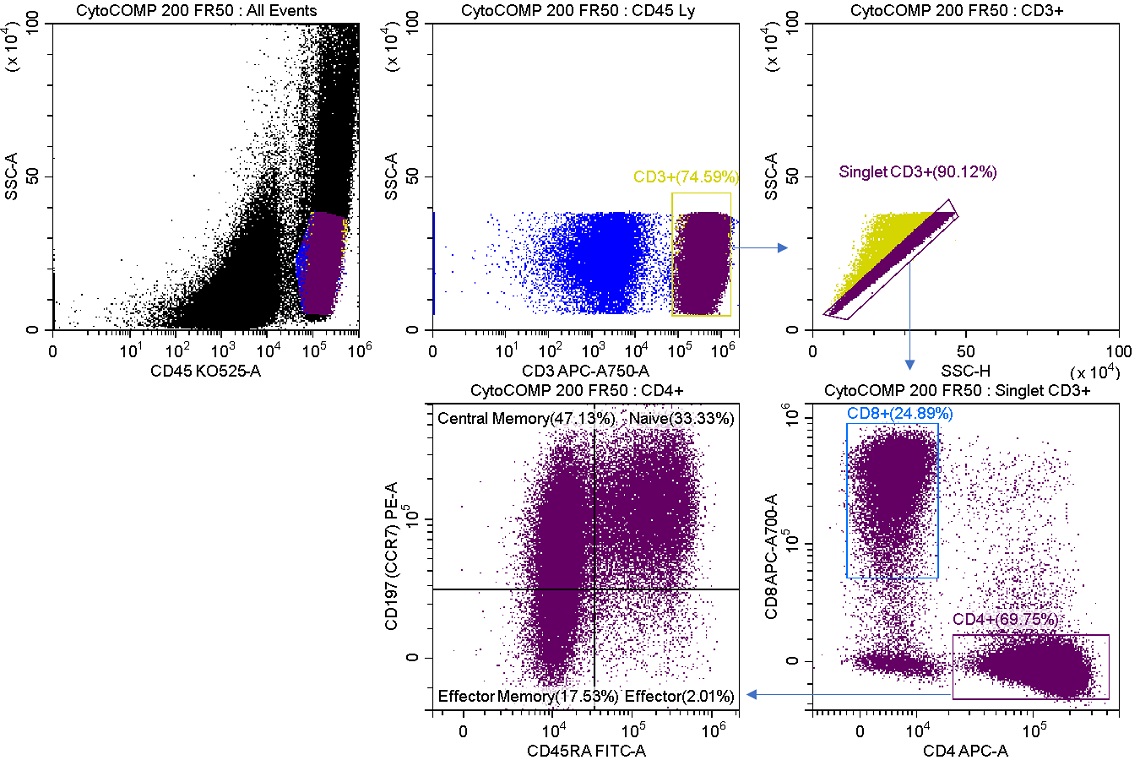 Figure 2. Sample Analysis Prior to Enrich and Purify Sorts Reconstituted lyophilized human lymphocytes, CYTO-COMP Cell Kit (Part Number 6607023) were stained with DURAClone IM T Cell Subsets (Part Number B53328) per the instructions for use and data acquired on the CytoFLEX SRT Cell Sorter. Regions were drawn using CytExpert SRT software. Population statistics are displayed for all regions for comparison to post sort populations.


The CytoFLEX SRT cell sorter has been set up to enrich for CD8+ T cells, figure 3. This sample could now be run at high speed compared to the rate of droplets generated and minimize cell loss of this population. Note the high efficiency of this sort indicating no loss due to aborts. Upon re-analyzing the sorted sample, it can be shown that purity is still higher than in the initial sort sample, but lower than expected if using a more stringent sort mode such as Purify, figure 4. 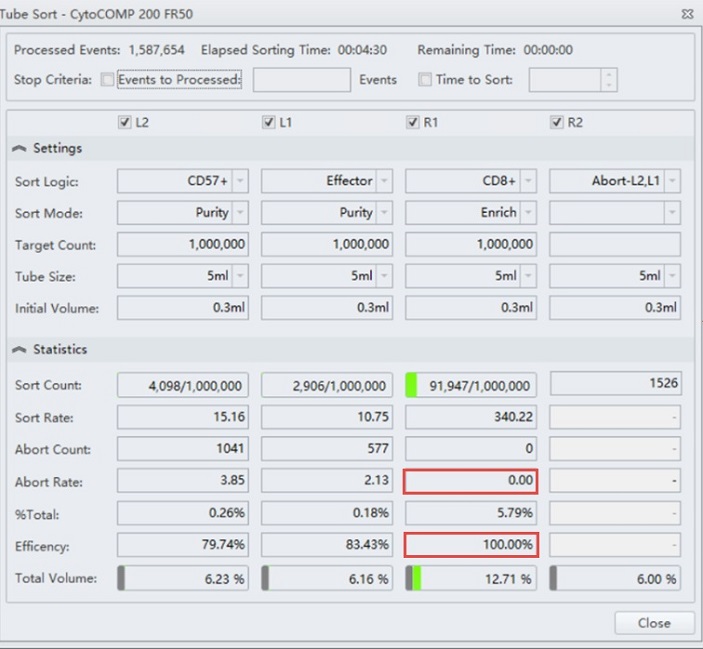 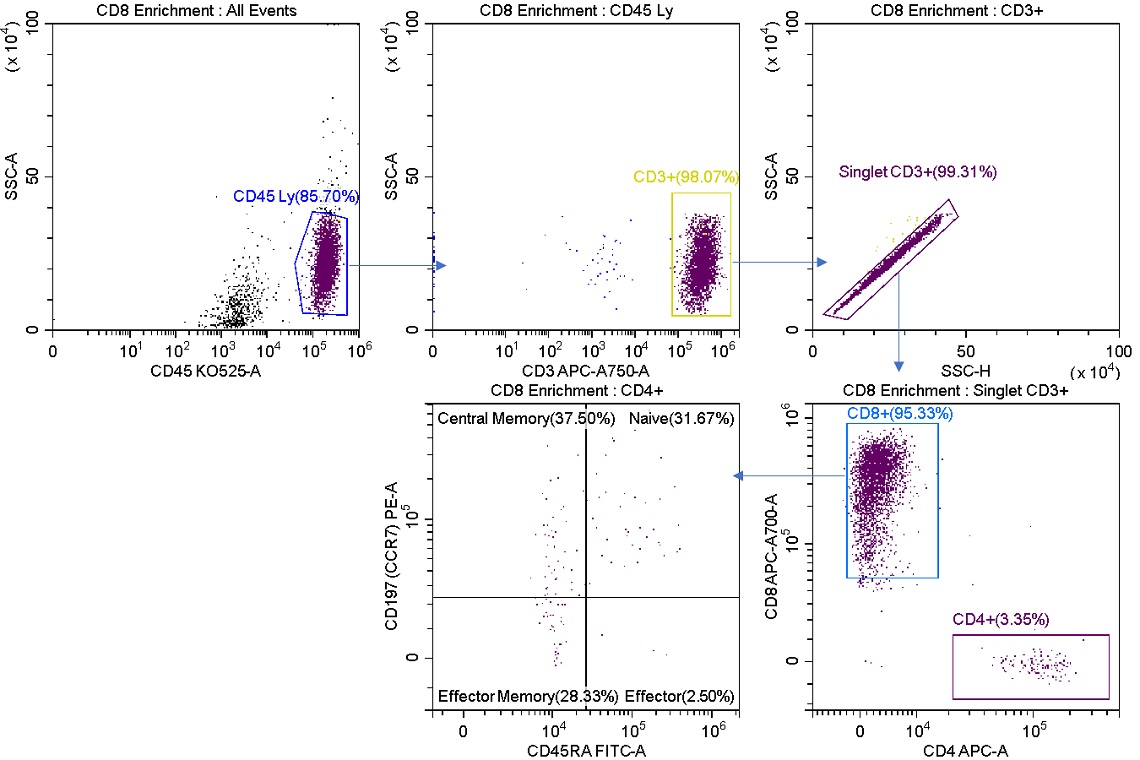 In the same experiment the researcher wanted the Effector population to have high purity. The sort mode selected in this case is Purity, figure 5. Notice the lower efficiency in this stream. 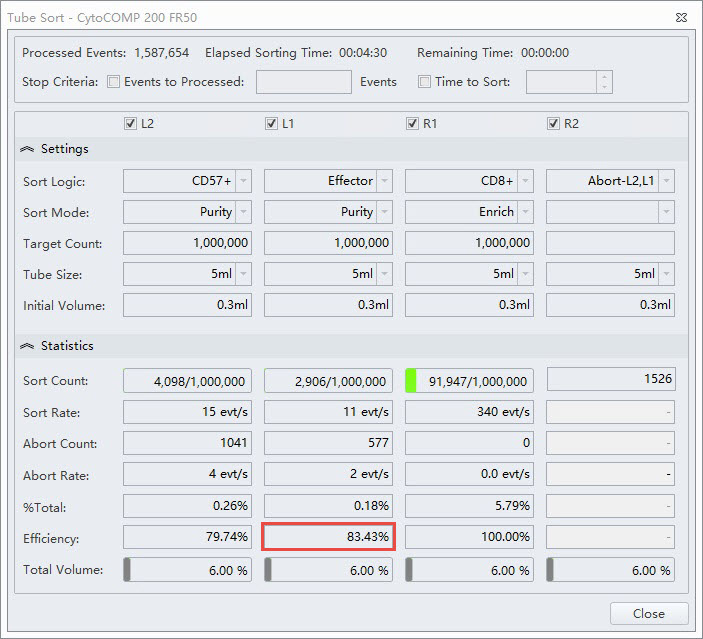 Figure 5. Tube Sort Statistics for Effector Purity Mode. Tube Sort window showing settings for four sort streams as gated on the sample shown in figure 2. L1 position is set to Purity mode for CD4+ Effector cells. The red box indicates the lower efficiency statistic for this sort as compared to the Enrich mode.

Upon re-analysis of the sorted product (figure 6), the population sorted with the Purify mode is at a very high purity compared to the population sorted with the Enrich mode. The tradeoff however is that the sort is overall less efficient as some cells are lost to aborts. This tradeoff between purity and abort rate becomes more evident when sorting at higher speeds as the events per second approach the rate of droplet generation. 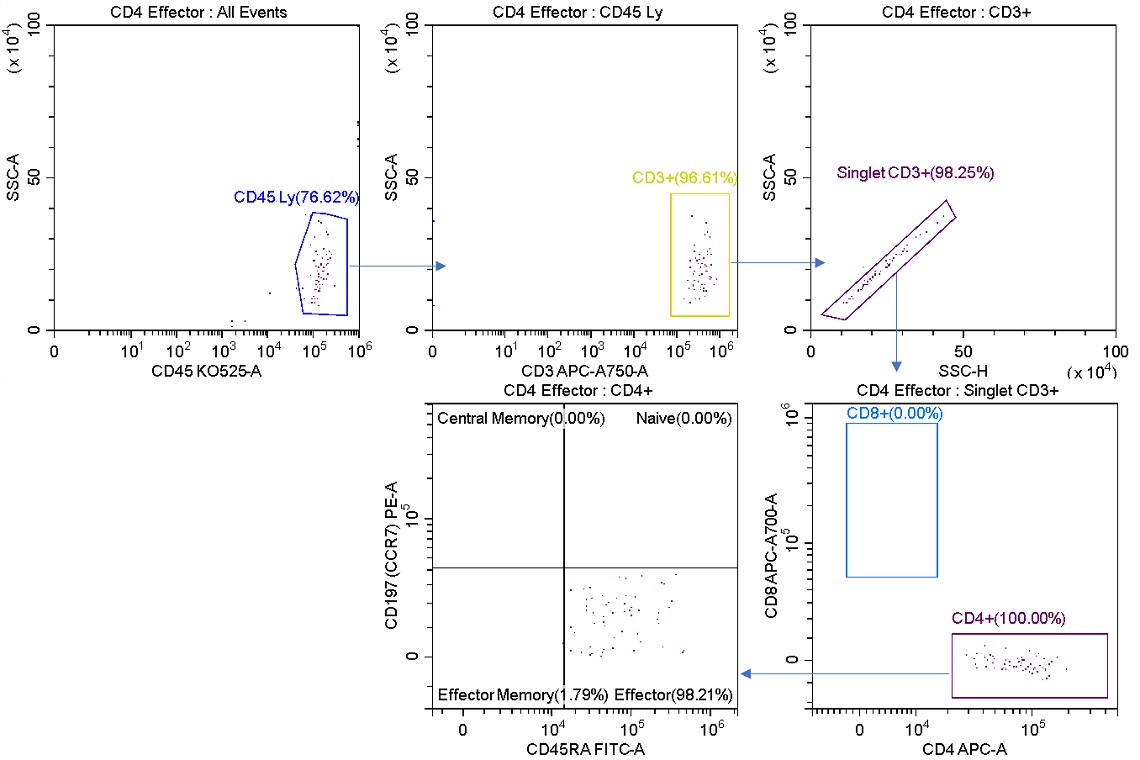 We’ve previously shown that sorting at higher speeds compared to your rate of droplet formation results in lower efficiency (i.e. higher aborts). In this section we will show that by making use of mixed-mode sorting, we can sort populations to high purity in one stream and send aborts from that and other sort streams to another stream. In this way, aborted events can be used for other experiments rather than sent to waste. 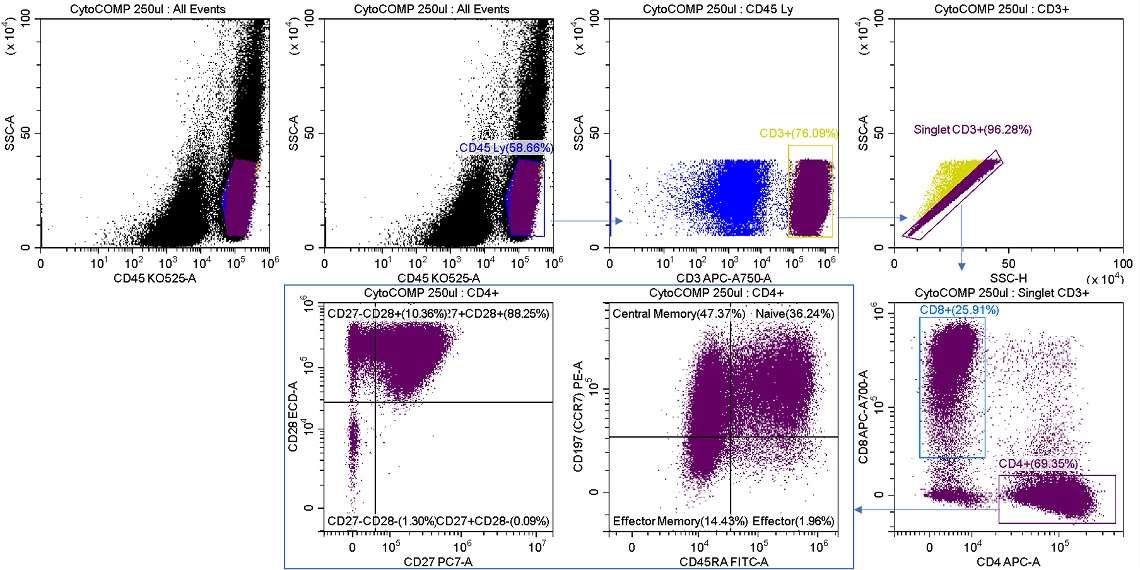 Shown below is a sort for CD4 T cell memory subsets from the sample analysis shown in figure 7. The Purity sort mode was used for all three target populations, and the aborts were sent to sort stream R2, figure 8. 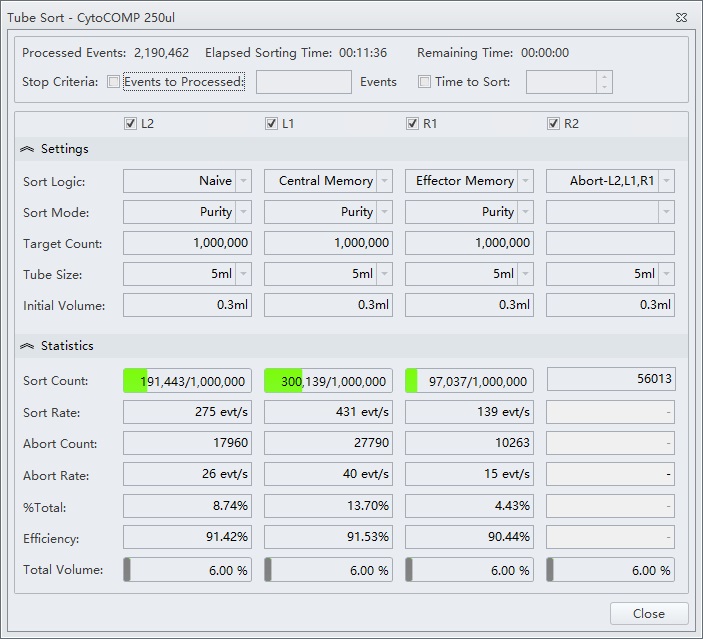 Figure 8. Tube Sort Statistics for Purity Mode Sorts and Abort Catches. Tube Sort window showing settings for four sort streams as gated on the sample shown in figure 7. L2, L1, and R1 positions are set to Purity mode and R2 is set to catch aborts from the three other streams.

As long as one of the four streams is unused, aborted droplets from any or all of the other streams can be sent to this alternative, allowing for lossless sorting of target populations. Figure 9 displays the post sort analysis of the abort stream. It has representation of all the selected events, plus the undesired contaminates that contributed to the aborts. 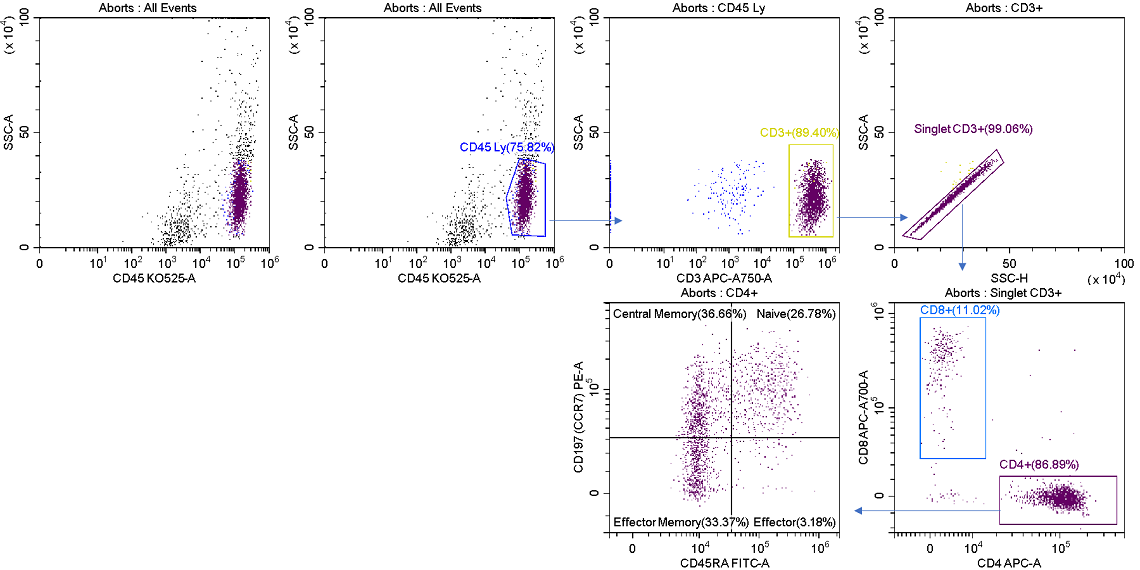 With multiple options for sort mode, the CytoFLEX SRT allows researchers to have a high level of control over the level of enrichment of targets required on a case-by-case basis. This mixed-mode utility can allow for lossless sorting of valuable populations. Populations can be sorted to high purity, while preserving aborted events for re-sorting or further analysis.

For Research Use Only. Not for use in diagnostic procedures.